At Pittsburgh Career Institute, we aren’t just coworkers and classmates, we’re family. Peggy Brinton joined the PCI family to build our Respiratory Therapy program, and she’s done an outstanding job! We’re thrilled to have her with us, so we took the time this month to chat with Peggy and get to know her better! 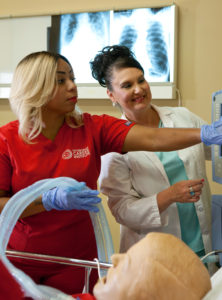 Before learning about Respiratory Therapy, Peggy originally worked in property management for 11 years. At one point during her career, her father became sick and was in and out of hospitals. Peggy noticed that some of the medical personnel were kind, but others were not the nicest. This experience caused her to ask herself if she wanted to be in real estate for the rest of her life. She decided that she would rather make a difference and build a career out of helping other people!

Peggy was initially interested in a career in medical assisting. When she inquired about medical assisting, she was referred to Respiratory Therapy instead because of her strong math and science background. Peggy took the plunge and entered the exciting and fulfilling world of Respiratory Therapy almost 14 years ago, and has loved every minute of it!

As our Respiratory Therapy Program Director, Peggy has the responsibility of overseeing PCI’s Respiratory Therapy program as well as instructing. She said it was initially very challenging, but within several months, Peggy was able to make significant improvements to the program – a never-ending effort that continues today.

When asked about what makes her program stand out, Peggy says:

”Dedication has been required for me to make this course successful. This field is my passion, and I love it so much! It has been extremely rewarding to me. The students who are coming in could be treating me someday, so I want my students to graduate as the best of the best!” 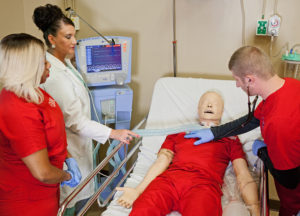 Peggy had the option of staying at the hospital and working in the Neonatal ICU with the babies she loved, but instead she chose to teach at PCI. When asked why she would make that choice, she said that she could sense a passion for education and Respiratory Therapy at PCI. She knew that she was going to be in the right environment! The thing Peggy loves most about PCI is the students. She enjoys watching them grow from unsure, nervous freshmen into critical thinkers. Being a part of that evolution is incredibly rewarding!

Peggy’s biggest piece of advice for potential students is for them to research Respiratory Therapy and your various career options after graduation. You can work in the ICU like Peggy, a doctor’s office, hospital, in home care, or even in a sleep lab. There are so many options out there! If you’re uncertain, Peggy recommends that you shadow a Respiratory Therapist at a local hospital or sit in on a class to see what it’s like. Don’t just jump in until you’re sure about the choice you’re making!